I like to tell people that when we were expecting our first child, I was SO convinced it would be a girl. I don’t know why, I just thought that. I tried my best to prepare mentally: specifically perfecting the evil eye I would give any boys who would try to step to her. Well…I was wrong. We had a boy, and he’s awesome. I love Hudson with all my heart and I love being his dad.

This time around I was pretty confident that at least ONE of the kids would be a girl, and that’s what my wife wanted too. We went to this 3D Ultrasound place in Fort Mill (we used them for Hudson too and they’re awesome) with my Mom and Aunt. The big moment arrived and…boys…both of them. Cool! “Hudson will have someone to beat up on,” I thought, “and they’ll gang up on him too, it’ll be great.” Then came the other fun stuff like “Oh Lord, they’re gonna eat us out of house and home!”

Not a day went by during my wife’s pregnancy that I wasn’t completely amazed that we were having twins. Heck I STILL can’t believe we have twins! 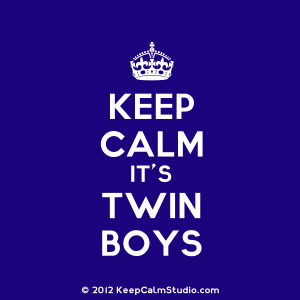 Posted on October 8, 2013, in pregnancy and tagged boys, pregnancy, ultrasound. Bookmark the permalink. Leave a comment.