So Yeah, This is Really Gonna Happen… 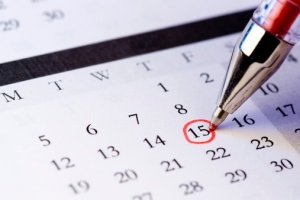 We, or should I say my wife, had a ton of appointments over the following weeks: regular OB appointments, appointments with the high-risk doctor, appointments at the cardiologists office.  Whew.  Unfortunately I didn’t go to all of those since I was hoarding all my PTO time for work so I can take off as much time as possible once the boys were born.  A lot went on during this time, too.  First, I applied for FMLA through my job so my job can be protected while I was out with the babies.  This was pretty promptly denied since I was with the company for 6 months, not an entire year.  That was pretty absurd, but considering all we were about to be facing, it wasn’t too major.  I spent my work time trying to prepare for the time I’d be out: since I was the only one who could do my job, I needed to find someone who would be able to do it while I was out, which was pretty tough work.

I remember one morning being in a painfully boring meeting while my wife was at an appointment nearby getting the babies’ heartbeats and whatnot checked out.  At one point she sent me a text saying that they had a hard time finding Nolan’s heartbeat and they were sending her to the adjoining hospital for an additional look.  Well I freaked, and without saying anything I gathered my stuff and bolted out of the meeting.  Thank God I work about 5 minutes from that particular hospital, so I hauled my way there and tried to find Bekah.  I got there and she didn’t seem worried, meanwhile I was trying not to piss my pants.  She tried to tell me I didn’t have to be there but I wasn’t having any of that.  Then the nurse came in and told me this was just an added precaution they do pretty frequently: if the doctor’s office can’t find things quickly, they just send you next door to the hospital where they can take their time and use stronger equipment, that way other appointments don’t get held up.  OHHHHHHHHHHHHHHHHHHHHHHHHHHHHHHHHHHHHHHHHHHHHHHHH.  I get it now.  Oh well, stupid me!  At least I got to spend some time with my wife in the middle of a work day, which was really nice.

So at one of the appointments with the high-risk doctor, he decided we were far enough along to begin discussing a C-Section, since BOTH babies decided to do somersaults in there and they were both breached.  You see, til this point they wouldn’t just let us pick a random date, take the babies out, and then treat Nolan.  The goal was to keep them in as long as possible so their lungs can develop fully.  The doctor looked on his calendar and chose one date, a Monday I think, to do an amnio test to see how the babies’ lungs were doing.  If it came back positive, the C-Section would be held the next day.  So this was it…we had a date.  We still had something like 3 or 4 weeks til that date, but it was something concrete as opposed to “Well, they’re due at the end of the year.”  It was crazy, but the real craziness was only just beginning.  We had so much to do: who would watch our oldest while we were at the hospital?  Who would watch the dog?  How am I gonna deal?  AHHHH!