← The Big One!
Cue the Frustration →

Christmastime is Here…Cue the Traveling Fear

Now that our twins celebrated their first birthday, it was time to look ahead to even bigger things: Christmas.  But no no no, this wasn’t going to be Christmas all snuggled up at home just the 5 of us and the dog; we were going to pack everyone up and drive down to Florida to be with my wife’s family for a week.  Before we get to that, let’s talk about home.  Last Christmas was spent half at home and half at the hospital with Nolan, who was still intubated with his chest open.  I gotta tell you, spending Christmas in the hospital is surreal, and while he was getting awesome care as always, it just kinda sucks the joy and wonder out of Christmas, since the only wish I had was to have Nolan home.  Now that he was home, we had the chance to really enjoy Christmas as a whole family.  As Hudson gets older, he absolutely loves Christmas and the twins seemed to enjoy the tree and festivities: 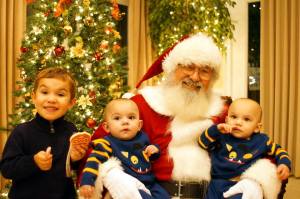 Now onto the travel part of our tour.  We’ve made the trip plenty of times: when it was just my wife and I, it would take us somewhere around 7 hours to make the drive.  When Hudson was born and we brought him, it was a little bit longer, but we were still able just to pack up the car and go.  This time, preparations were just bonkers.  Not only did we have to take the van, but most of the seats in the van would be filled with people.  Me and Bekah in the front, Grant and Nolan in the next 2 seats, then Hudson in the back with the other half folded down.  And we loaded the mess outta that van.  We had a suitcase for me and Bekah, a suitcase for Hudson, and one for the twins.  Then we had to pack snacks, formula, feed supplies for Nolan…ugh, just thinking back on it makes me itch.

For me, though, the worst part wasn’t so much the packing or preparation…it was the growing paranoia I had as our departure date got closer.  I started to focus a whole lot on all the “what if’s”: What if Nolan’s feed pump stops working?  What if something happens while we’re driving?  Will we be able to find a decent hospital?  Will that hospital know how to treat Nolan?  I know, I know…paranoid.  But for me they were legit concerns: we’d been through so much with this kid, that I didn’t want anything to go wrong.  If I forgot to pack socks or something, that’s one thing, but medical problems are another.  My father-in-law is a Doctor, but he was still 7+ hours away.  We just had to GET there.

We made the decision to (potentially) make the ride easier on ourselves by splitting up the trip both ways and staying in a hotel for a night.  We decided on Savannah as a good stopping point.  I priceline’d a hotel (love me some Priceline) and it seemed we were all set to go.  As they say in infomercials, though, “BUT WAIT!”  As we were starting to load up the car, Nolan was taking a nap in the swing.  I walked over to check on him for a quick minute and noticed that his feet and nail beds were a little on the bluish side.  Not full-blown Smurf, just a little bit.  Sometimes that would happen to Nolan if he’s got a stuffy nose or gets super fussy.  Usually we’ll calm him down or get him sitting up for a bit and he’s fine.  This worried me a bit.  We hooked him up to the sat reader and believe it or not they were reading in the mid-80’s, so it was a little weird.  Eventually, though, it settled down and he was just fine.  Turns out he had some horribly bad diahrrea, which made the first part of our trip a BLAST (lol get it?).  Sorry, that was bad.

Anyways, off we went…and our drive went well: we had Hudson entertained in the back and the twins were relatively happy and we were making good time.  We were working our way through South Carolina, maybe 90 minutes or so from Savannah, when we hit traffic.  I HATE traffic.  I know everyone does, but I can’t stand it.  The 90 minute drive took seemingly forever, and when we finally got to Savannah we were all tired, hungry, and cranky.  Luckily, though, we managed to have a good night’s sleep.  After that we hit up Tybee Island for some winter beach fun before hitting the road again: 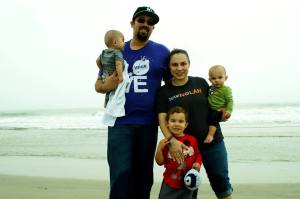 When we got to Florida, the kids had a lot of fun.  My wife is from a HUGE family, so there were lots of people to play with the kids.  Nolan got over the squirts and was back to his happy self again.  We even got to go to LegoLand as a family.  Hudson loved that, but even in the winter, Florida proved to be a little too hot for Nolan.  He was sweaty and cranky and we knew we couldn’t have him outside much longer.  Luckily LegoLand has what’s called the Baby Depot: it’s an air conditioned building with a changing/feeding station and a play area for little ones.  Grant crawled off to play legos with Hudson, and we laid Nolan down on a big bean bag chair in the corner.  As soon as he hit that chair he zonked out.  Poor little guy.  Yes, extreme weather is difficult for heart babies, you have to be really careful of the heat as well as the cold.  I have a feeling most of our family trips will be in the Spring and Fall.

We eventually made our way back – with another Savannah stop in between.  It was a really good trip: no major issues with Nolan aside from the early tummy troubles.  None of my paranoia came true, which is great.  I can’t lie, I was expecting it to be a trip of horrors, full of screaming kids and an extreme lack of sleep.  But I was pleasantly surprised.  I know we won’t be able to make tons of trips with our little ones, particularly Nolan (it’ll be easier once he’s eating by mouth, hopefully)…but we got the most out of this one and I will cherish the memories.

← The Big One!
Cue the Frustration →