← HLHS Dad on the Radio!
Heart Dads and PTSD →

Dear G-Tube: This is Your Eviction Notice

As of writing this entry, Nolan is 19 months old and very soon to be 20 months old.  If you recall from waaaaay back in this blog, he had a G-Tube placed for feeds just before he went home from the Norwood Procedure.  So at the time, Nolan had been in the hospital for almost 2 months…he was SO close to being home, we were exhausted, and we just wanted our family to be whole for the first time since the twins were born.  Speech therapy came into his room and did a half-hearted attempt to get him to drink from a bottle, but no luck (and no duh, he had been intubated for over a month!).  So they went the G-Tube Route and we quickly agreed…whatever it took to get him home.

Fast-forward 17 months and he’s still on the G-Tube…and it sucks.  IT.  SUCKS.  I can’t stand that thing, more for his sake than mine.  I hate that sometimes he steps on it when he tries to stand and it pulls and hurts him.  I hate that sometimes the tube pops open during a feed and covers his bed completely in smelly Pediasure.  And I hate that idea that he just doesn’t eat like his twin brother can, which he wants SO badly to do.  I’ve noticed that lately if I give something to either of his brothers, Nolan will FLIP if I don’t give it to him too.  He goes to speech therapy twice a week and the results are so up-and-down, it’s ridiculous.  Sometimes I can get him to eat 5 bites of baby food…then he’ll eat nothing for 3 weeks.  Then it’ll take him 3 days to eat a pouch of baby food…then he’ll spit up daily for a week.  Ugh, so frustrating!  To make things worse, Nolan’s GI team put in the G-Tube but never once put a plan in place to get him off the G-Tube.  Say what now?

In my last post, I mentioned an internet radio show about CHDs called Heart to Heart with Anna.  During the episode where I was a guest, Anna mentioned a previous show she did about heart kids and G-Tubes.  A few days ago, we had a listen to this episode and our eyes were opened.  It talked about a parent who used a program in Austria called No Tube, and her child was weaned completely off tube feeding in a matter of weeks.  WHAT?!  So we did the research: this program is very in-depth (and expensive) and have a success rate of over 90%.  WOW.  And why don’t we have this in the US?  My wife and I did a ton of research (she did more than I did) into the subject and found parents who used the system or one like it to successfully wean their kids off the tube.  Obviously we can’t afford to fly to Austria and we couldn’t afford the web-based program, so we’re off to try it ourselves.  The key is understanding that tube-feeding keeps kids full…and if you’re full, why eat by mouth, right?  Right.

So last Saturday we started by waking Nolan up and giving him a VERY small tube feed while trying to feed him by mouth.  He had like 2 bites and then refused.  So we turned off the pump and let him play.  Some time went by before we decided to try again.  This time, Nolan TORE up that baby food!  A few hours later, we tried it again and he ate some more.  Then we kept repeating.  While he was eating, we would run the feeding pump, so he wasn’t dehydrated or under-nourished.  By the end of Saturday, Nolan had eaten two entire containers of baby food by mouth! 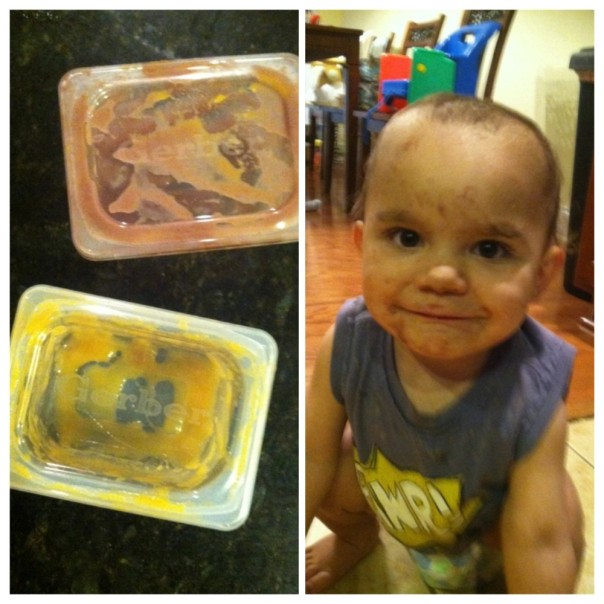 Look at that happy, messy face!  He went to bed with a full tube feed that night and we repeated on Sunday.

On Sunday he did an even better job of eating: he finished 3 whole containers of baby food and even drank some water from a cup!  YES!

So we’re going to spend the next couple weeks working very hard to keep up the feeds by mouth.  It’s hard work and fairly time-consuming…but it’s worth it!  The results don’t lie!  I know he has quite some time to go before we get that G-Tube out, but this is a great step in the right direction.  I will continue periodically documenting his progress here on the blog and I know it’s going to be a HUGE celebration once that G-Tube is out…and that is definitely a reality, as he’s made more progress in a couple days than he has in almost a year.

The truth is that many G.I teams here in the states will put in the G-Tube but don’t have a plan for it to come out.  That’s a shame: it’s left up to families to work hard with the child and therapy teams in order for this to happen.  Nolan’s speech therapist is AWESOME and she has worked very hard to get him to this stage.  Now’s where the real work begins!  I’m so thankful for Nolan’s progress and thankful for the folks in Austria who developed such an amazing program.  In their honor, here’s another Austrian that EVERYONE loves: 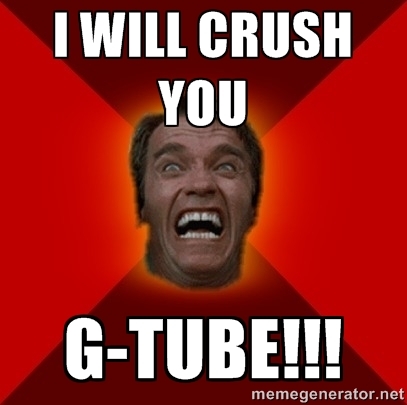 ← HLHS Dad on the Radio!
Heart Dads and PTSD →